I was sitting in bed with Burt tonight, watching him be his little ten-week-old self, and I wondered what kind of dog he’ll be in adulthood. I wondered what funny little behaviors are as-of-yet unrecognized harbingers of his future personality. I mentally compared him to other puppies I’d known to try to glean clues about his level of calm, intelligence, sweetness. We went to the veterinarian yesterday for his booster shots, our first visit together, and I told her that I’ve never seen a dog resist restraint like Burt does. The harder you try to hug him to you, the harder he fights and yowls and bites to get away. “Yep,” said the vet. “He’s an Alpha Male, alright.” My stomach plunged a little as I envisioned aggression on mountain trails and endless humping of human legs. And yet, as I type this, Burt is laying across my chest and chewing on my ears in a most affectionate way. When I come home during lunch and after work, he’s excited to see me, his little tail swinging like a black and white metronome with lopsided weights.  He’s not very snuggly – he prefers to sleep in his crate – but he’s sweet little guy and the affection I feel for him is plainly mutual, if not, perhaps, entirely reciprocated.

Dogs give us a strange and unique perspective on the cycle of life. Rarely is the animal-human connection as tightly bonded as dogs and their humans; at least one study shows that humans often show more empathy for dogs even than they do for other humans. We co-evolved together so closely that dogs have behaviors specifically suited to ours. Entire industries boom around perfectly bred puppies, agility shows, and “indestructible” chew toys. But rather than living out most of our lives with these companions, we get them almost from infancy, bond to them closely, and then watch them mature and die. Frequently humans experience the death of a beloved dog many, many times. And yet, despite the crushing heartbreak, we bring another dog into our lives to repeat the cycle over again. Why?

As I watch Burt bumble around and pee on everything, I can’t help but frequently think of my last dog, Lois. As I lay in bed tonight, I had the overpowering sensation of wishing that Lois could just come hang out with me for an afternoon. I had a vivid vision of her running through the door, crashing into my legs, and leaning against me while I combed my fingers through her long, soft black fur. I wasn’t even sad, at first; it didn’t feel sentimental. It was just a thought that went like this: “How cool would it be to hang out with Lois for an afternoon?”

Without warning, I found myself stabbed by the kind of breath-catching grief you feel when you’ve just lost something that you know is gone forever, but you can’t quite believe it, and so you construct impossible scenarios about how the thing might be returned. For a moment, it made sense to think that it actually was possible for Lois to come bounding into my room. Why not? I could see it in my mind’s eye; she is real, or had been; I know what she looked like and smelled like and behaved like; I could almost conjure her into existence.

And yet. Whatever might be happening in the infinite universes surrounding us (and the romantic in me likes to think about a world where all the dogs and all the humans who ever loved them lived happily ever after), in this world, I will never see Lois again. The guilt I feel about not being a better mommy; the questions I have about how, just as I had reached the stability and comfort of a career adult, and had taken her to the vet for the first time in three years and gotten her a clean bill of health, how, how, how she could have died of a tumor the size of a 2-liter soda bottle two months later; the niggling doubts that maybe if I’d fed her better or walked her more or tried harder to keep her from eating two dozen cupcakes at a time, or two pounds of plastic-wrapped Swiss chocolate at a time, or several pairs of underwear, the situation would have different – these things will never be resolved completely. They’ll sit untied forever.

But despite my shortcomings as a millennial dog parent, Lois was perennially joyful. She asked many a crumb of me, certainly; but even if I had never given her one, she would have been there, like the brave little bird in Dickinson’s poem, implacably sweet, keeping me warm. Lois was truly with me during some of the strangest seas of my life. Together, we traversed the chill lands of moving far away from home, intense financial strain, divorce. Sometimes I’d go out with my friends, leaving Lois alone for way too long, knowing I’d be coming home to a giant pile of poo and a few ruined possessions. But she never seemed to love me the less for it. I’d like to think anyone who saw me and Lois together knew we were two peas in a pod. She was my girl. I was hers. We only had five years together, but they were five of the most formative and important years of my life, and I believe that they would have been much more difficult without her.

Lois died a year and a half before I found Burt. Even shortly after her death, I was actually very content being without a dog. I started graduate school, lived in Mexico for several months, spent the night with friends and lovers, unworried about coming home in time to let a needy soul out to pee. Literally, for the first time in my life, I took care of no-one and nothing but myself. It was glorious.

And, just as suddenly as Lois died, the urgent sense of wanting a dog (and not just a puppy, but a dog), returned around Christmastime. I had reasons, but the reasons seemed to be merely supporting the overwhelming feeling that it was just time again. A brief search on KSL, Utah’s specialized and less smutty version of Craigslist, showed several puppies of Newfoundland descent. I got lucky: a family in Logan had accidentally had a litter of pups with the neighboring dog. Burt is half Newfoundland, half Karelian Bear Dog (look it up – I hadn’t heard of them before either, but they’re fascinating dogs). He’s colored like a Karelian, black and white, but has a short shout and huge, floppy ears like a Newfie. I’m eagerly imagining what he’ll grow up to look like. He’s really a beautiful boy.

Already, life with a dog is wonderful. It’s different, of course, and has its challenges. I do not enjoy wiping warm urine off the kitchen tile, again. But Burt’s silliness and gorgeous eyes make up for it, and I can already tell that he’s going to be a fantastic adult. He’s rambunctious, but compared to most puppies, he’s actually fairly calm. He’s very smart and can already come, sit, lay, and drop things he’s carrying on command (I’d like to grant a little credit to his trainer, too :)). He’s very different from Lois, but he’s a funny little guy and he brings me a lot of happy moments, pure and simple.

Or maybe I just got super lucky twice. 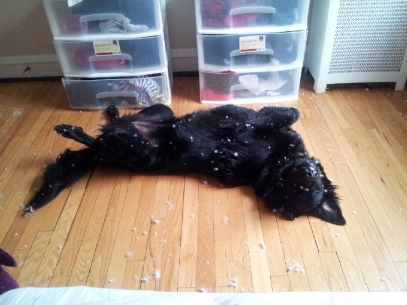 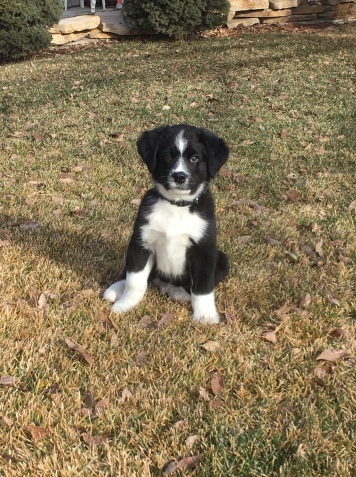